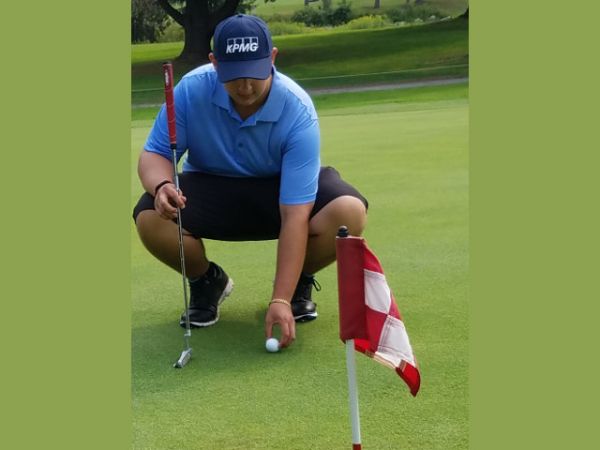 Hard work has paid off for over a dozen Oswego High School athletes who took the summer to improve their golf game and ultimately secured themselves a spot on the 2018 team.

After two grueling days of tryouts, which took place at the team’s sister course, Battle Island State Park in Fulton, the 2018 Oswego High School golf team was more than ready for its first match of the season recently against the Auburn Maroons. The 12-man roster includes players with a wide-range of ages and experience levels.

Securing medalist honors through tryouts this season was senior player Chris Sugar, whose 18-hole score of 77 bested the 16-player field. His one under second nine placed him on top by a full five strokes. Securing second in the standings was senior Ben Stevens with a score of 82. Another senior, Gavin Neuland placed third with a score of 85. Coach Dan Rose expressed his gratitude to all players for their commitment of the sport and drive to succeed.

“Many of these golfers took time this summer to play competitively around the Syracuse area,” said Coach Dan Rose. “There is a big difference between teeing it up with your friends on a Saturday afternoon and grinding it out ‘inside the ropes’ at a big junior tournament or Syracuse district event. For our first match, these high schoolers will surely draw on their summer golf experience.”

He said the team is expected to lean on the five seniors who made the 2018 team, particularly early in the season. In addition to the aforementioned seniors, Ethan Proud and Riley Crisafulli also made the roster.

Coach Rose said he is excited about the younger players who are expected to infuse the team with a new-found energy. Junior starter Cole Cullinan and freshman Jack Hall shot scores of 86 and 91 to secure spots on the varsity team. Three other freshman players: Zach Chamberlain, Jack O’leary and Neil Roman, have already showed signs of maturity and caught Rose’s attention.

As the team progresses through the upcoming season, Rose will establish the gamers- the players whose games hold up under the stress of competition.