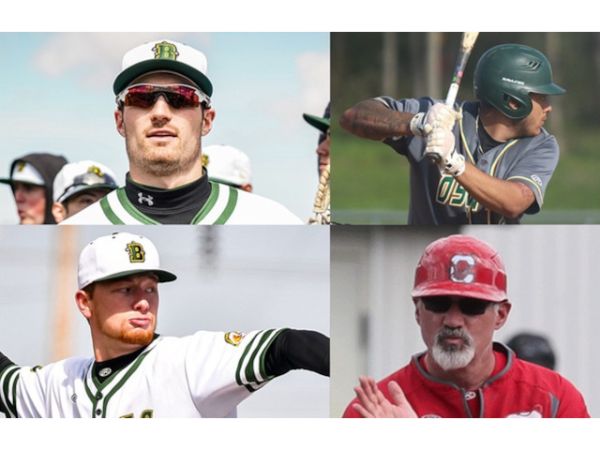 Bob Wallace Player of the Year - Tom Kretzler, Brockport
Kretzler earns the Bob Wallace Player of the Year honor for the second year in a row. This season Kretzler totaled 60 hits, 45 runs, 62 RBI (2nd in the league), 13 doules (4th), four triples (3rd) and a conference high 16 homers. He add seven wins on the mound for the Golden Eagles with 65 strikeouts and a 1.86 ERA in 62.5 innings pitched. Kretzler earned first team All-SUNYAC and was also the Athlete of the Week three times this season.

Bob "Sparky" Wallace Player of the Year - Bob "Sparky" Wallace graduated from Cortland in 1953 and began coaching the Red Dragons in 1958. In his 24 seasons as head coach, his team compiled a 366-207-3 record, winning 10 SUNYAC titles and making an NCAA appearance in 1981. Wallace was inducted into Cortland's C-Club Hall of Fame in 1979, and Cortland's baseball field is named in his honor.

Don Axtell Pitcher of the Year - Andrew Huffman, Brockport
On the mound, Huffman led the league with 88 strikeouts and eight wins. He ended the season 8-2 overall with a 2.44 ERA allowing just 18 earned runs in 66.1 innings pitched. Huffman and his team went 2-2 in post-season play as the third seed, losing to Cortland twice. This season he earned SUNYAC Pitcher of the Week honors twice.

Don Axtell Pitcher of the Year - Don Axtell was the baseball coach at Oneonta for 30 years, leading the Red Dragons to many successful seasons. His teams won or shared 10 SUNYAC titles, made the school's only visit to the ECAC Championships (1974 and 1975), and was selected as the SUNYAC Coach of the Year four times. His last Coach of the Year Award came in 1989. He also was inducted into the SUNY Oneonta Hall Of Fame in 2001 and the Waverly High School Hall of Fame.

Clark V. Whited Rookie of the Year - Tishawn Featherstone, Oswego
In his rookie season, Featherstone accumulated 23 RBI, 22 hits and five homers in 83 at bats. The freshman infielder had a season high of four hits in a game vs. Plattsburgh this season. Oswego earned the No. 1 seed and right to host the SUNYAC championship, but was eliminated from the tournament with loses to Cortland and Brockport.

Clark V. Whited Rookie of the Year - Clark Whited coached the Brockport Golden Eagles for 22 years (1947-68), amassing a 128-93-1 overall record during his tenure. His 128 wins were the most of any baseball coach at the school until 2003. Whited was inducted into the inaugural class of the SUNY Brockport Sports Hall of Fame in 1985, and the current baseball/softball complex at Brockport is named in his honor. Whited passed away on October 29, 2005.

Walter Nitardy Coach of the Year - Joe Brown, Cortland
Cortland was ranked first in the D3Baseball preseason poll as well as the SUNYAC preseason poll. Coach Brown led the Red Dragons to their second-straight and 36th overall SUNYAC title this season. Cortland is on a seven game-winning streak heading into the 2022 NCAA Division III baseball tournament. Under the leadership of Brown, Cortland has six players on the SUNYAC All-Conference team.