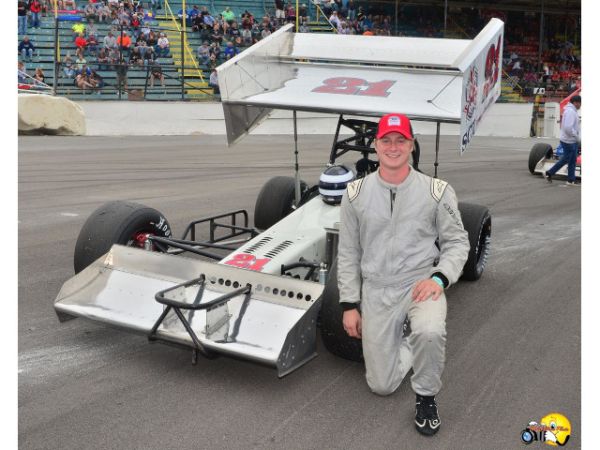 Since the inception of 350 Supermodifieds as a weekly class in 2019, Oswego Speedway has continued to see strong support from the New England based teams, including three-time Classic champion, Jeffrey Battle, and beginning last season; his younger brother Ryan, both of Westford, Massachusetts.

Born into one of the first families of New England Supermodified racing, Jeff, 21, and Ryan, 20, are grandsons of longtime car owner Eddie Witkum Sr, and also the nephews of veteran driver Eddie Witkum Jr.

The car Jeff has driven to four victories at Oswego Speedway is owned by another uncle; Rich Witkum, while Ryan’s No. 21; built brand new in 2018, is owned by Witkum Sr. and brother Bob, great uncle of the Battle brothers.

Prior to the 2022 season, Jeffrey had done all the driving, but when Witkum Jr. moved out of the Witkum Brothers No. 21 and into the seat of Dave Callahan’s No. 39; this gave Ryan opportunity to work on his first racing experience of any kind, and he proved a very quick study.

“I never raced at all before last year in the 350 class, and I think I was able to adapt to it pretty well,” stated Battle. “I grew up around 350 Super racing. I have a great car that was built by my uncle and grandfather a few years ago. It actually won the Classic with Dave Helliwell in 2018, so I started with a really good piece, and then having Jeffrey (Battle) and my uncle Ed (Witkum Jr.) as mentors helping me out is huge. We had a good season, but I’m hoping next year I can just be more consistent in getting better finishes, and passing more cars.”

While it would seem a “good” rookie season for most drivers would involve keeping their nose clean and bringing the car home in one piece, Battle’s rookie season included a feature win in what was only his eighth career start at Star Speedway in New Hampshire, and perhaps just as remarkable; the podium was swept by the Witkum Family as Ryan, Jeff, and Witkum Jr. finished one, two, and three in the 50-lap Jim Belfiore Memorial.

“That was an awesome race to win, especially with it being my first one,” said Battle. ”I think our uncle Joe (Witkum) was looking down on the family that night. Jeffrey and I raced hard together, we even touched which I felt bad about, but all in all it was a perfect night for us.”

Just two weeks later, Battle was back at the Steel Palace, making only his second start on the fast 5/8th’s of a mile after one prior appearance in July. Ryan started in seventh for the 25-lap Track Championship Night main, and by lap 5, he had already charged past five of Oswego’s finest; Josh Sokolic, Dalton Doyle, Kyle Perry, Vern LaFave, and Jason Spaulding, quickly taking control of the runner-up spot. Before long, he was working on Dave Cliff for the lead, but in the closing stages, was forced to fend off the challenges of brother Jeffrey, with Ryan beating his older brother to the line by just 0.029 seconds, making this the second time the brothers had shared the podium in the 2022 season.
“I had a lot of fun racing at Oswego. Being able to race at that facility is great. I’ve always loved it there and I remember going as a kid just to spectate or help in the pits,” mentioned Battle. “We made it there three times last season including the Classic and got on the podium again with my brother in August. When we’re on the track together, I always just try to look at him as another car out there, but of course I want to beat him and obviously he wants to beat me too. I just try my best not to cause any issues with him or the dinner table might get pretty awkward. It was awesome to race with him and get on the podium at both tracks last season. ”

After a stellar start to his Supermodified career; which also included qualifying fourth, and later finishing ninth in the Oswego Classic, 2023 plans called for additional trips west for both Battle brothers. Jeff has tabbed eight Oswego races on his already announced schedule, while Ryan is hoping to make at least six, beginning with the Season Opener on Saturday, May 27.

“I think we will be able to get there quite a bit,” Battle said of Oswego. “My brother will be racing there a lot too and if all goes to plan, the first one for both of us will be the Opener. Basically, we will be going to Oswego any time that Star, Lee, and Hudson are off. All three tracks are racing under the Star Speedway banner this year. Bobby Webber, who owns Star, had felt like people wanted to travel a little bit, so he included races at those other two tracks towards Star’s point fund. Looking at all of the schedules, I bet we will be able to get to Oswego about six times this season and we’re really looking forward to going back there.”

Battle and team have sponsorship from Scherbon Consolidated and Witkum Crane and Rigging.

Oswego’s 72nd Season Kickoff is scheduled for Saturday, May 27th, and will feature the 75-lap Jim Shampine Memorial for Novelis Supermodifieds, 35-lap Tony White Memorial for Pathfinder Bank SBS, and a 30-lap Memorial Weekend Special for the J&S Paving 350 Supermodifieds.

About Oswego Speedway: Oswego Speedway is a 5/8 mile semi-banked pavement racing oval located off the shores of Lake Ontario in scenic Oswego, NY. The speedway has been a continuously run weekly racing venue since August 1951. The premier open-wheel pavement short track cars in the world, Supermodifieds, run weekly at the Oswego Speedway making it the only weekly Supermodified racing venue in the world. The Small Block Supermodifieds and 350 Supermodifieds accompany the full blown Supers on a weekly Saturday night schedule which runs from May through September. Oswego Speedway is mentioned in racing circles as the “Indy of the East,” as no fewer than a dozen past and present competitors have competed at the famed Indianapolis Motor Speedway including Mario Andretti, two-time Indy 500 champion Gordon Johncock, and former International Classic Champions Bentley Warren, Joe Gosek, and Davey Hamilton.