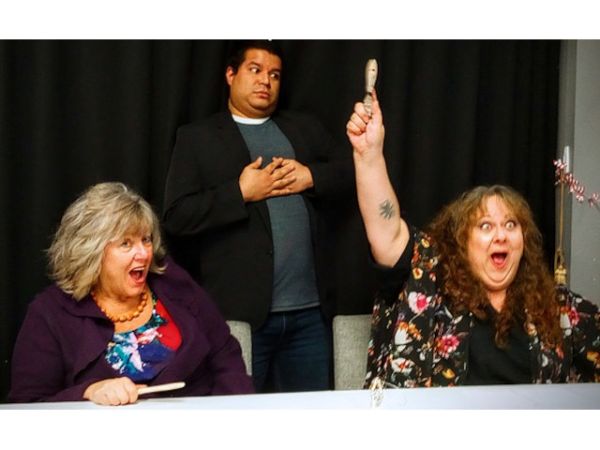 Pictured at the center of the action are sisters Sis (left), played by Lori Blackburn and Babe (right), and played by Kristin Ruth Cook. Overseeing the night’s events is Father Mac (center), played by Pablo Mendoza. Submitted photo

Love and luck by the numbers is in order at the CNY Community Arts Center this February season with their upcoming production of the hit comedy “The Queen of Bingo.”

The production will be presented weekends February 10 – 19 on the Center’s mainstage at 121 Cayuga Street in downtown Fulton, NY. Curtain times are Fridays, February 10 and 17 at 7PM, with matinee performances on Saturdays and Sundays, February 11, 12, 18, and 19 at 3PM. Note for this production, there will be no Saturday evening performances.

Written by Jeanne Michels and Phyllis Murphy, The Queen of Bingo was first performed in 1993 at Chicago’s Theatre a Go-Go and has a popular staple of regional and community theatre ever since.

The play portrays two sisters, Sis and Babe, on the other side of 50 wanting to add a little fun and excitement to their lives. But where do they find it? At Bingo of course! Through their eyes we meet all the regulars at St. Joe’s Bingo – where every week you’ll find Father Mac, Lonnie and Cindy Conklin, “The Fat One”, Marge Meranski, and Coach Anderson. The sisters dish dirt pour out their dreams while the balls continue to drop.

Sis is a good loser who just loves to play; Babe is a player who has always got to win! Sis is content in her widowhood; Babe is still looking for love. They complement each other in ways only sisters can, and they drive each other crazy in that same sisterly fashion. The time is right for change for both these women hoping that tonight might be their lucky night.

Supporting the ladies in their quest for love and luck on this particular Tuesday night in Battle Creek is the crew of St Joe’s. Pablo Mendoza is playing Father “Mac”, with Jay Merante as The Bingo Caller, Alex Taylor as Flo, and Rebeca Mendoza as Sister Aggrapina. The production is under the direction of William Edward White

The feel and excitement of Bingo extends out to the audience as well. During intermission at every performance the audience is invited to play along with Father “Mac” and the crew at St. Joe’s in the “Middle Bird Bingo.” The lucky winner of that round at each show will win a gift certificate to one of several Fulton area businesses who will be the featured sponsor of the Middle Bird game.

Tickets may be purchased online at https://cnyartscenter.com/tickets or by calling the Center at 315-598-ARTS (2787).

Published in Community News
Tagged under