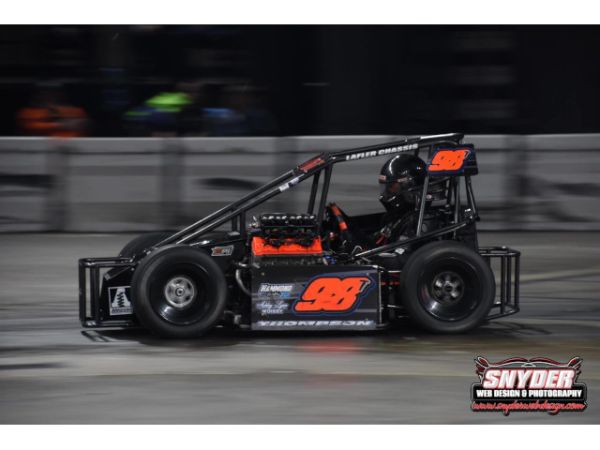 Leading the way will be a pair of ultra-quick TQ Midgets piloted by Tyler Thompson and Billy Pauch Jr.

Thompson, the 2019 winner of Oswego Speedway’s Budweiser International Classic, will be behind the wheel of the team’s No. 98T Lafler chassis, making his first attempt at the Allentown indoor race since 2020. Last year at Oswego, Thompson finished fifth in the Novelis Supermodified driver’s championship with one main event victory.

Pauch will return to the team’s second Lafler entry as No. 98, making his second consecutive attempt at the Allentown indoor race for JSR. A year ago, Pauch won a Friday night qualifier in his TQ return and had his sights set on a podium finish in the weekend’s main event before being spun from the front late in the going.

Making more than 50 starts last year in dirt modified competition, Pauch had three main event wins including a pair of victories at Bridgeport Motorsports Park, where he finished second in the track championship race.

This year Thompson and Pauch will be part of the entire Indoor Auto Racing Championship schedule with JSR, starting with the Allentown indoor race on January 6-7 and ending with the Gambler’s Classic in Atlantic City on January 27-28.

Joining Thompson and Pauch in the JSR stable, via a partnership with Slack Karts and Performance Manufacturing, will be a pair of former Indoor Auto Racing Championship Champ Kart champions in Jon Keister and Tyler Brown.

Keister, who will enter Allentown as the defending event winner in the Champ Kart division, used his series opening win last year to propel him to the overall 2022 series championship in the JSR, Slack Karts No. 12. Following Allentown, Keister finished fourth in the Atlantic City Gambler’s Classic and third in the Syracuse indoor race.

Brown, a series winner in Syracuse in 2019 and Allentown in 2020, is the 2020 series champion and will again pilot the JSR, Slack Karts No. 98 this season after finishing fourth in the overall championship a year ago.

A final Champ Kart entry will also be filed as No. 97 for Dan Kapuscinski, who finished fourth in the Syracuse indoor event for Champ Karts in 2022.

More in this category: « 350 Super Sophomore Ryan Battle Eyeing Six Trips to Oswego in 2023 Mohawk Northeast to Continue Support of Driver Dan Kapuscinski & Flack Racing in 2023 »
back to top