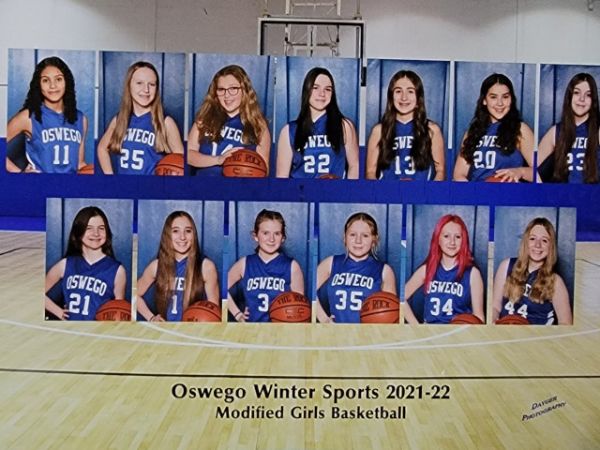 Coach Brad Shannon’s girls raced out to early first period lead just like they’ve done all season. Warner opened the scoring with a rebound and layup. The unselfish Lady Bucs scored the next four baskets, all with assists from teammates. Cruz scored the first bucket on a pass from Garafolo. Pezzlo assisted on the next score, cashed in by Garafolo. Pezzlo scored the next baskets, both assisted by Cruz, and Oswego was off and running to a 10-0 lead. Warner added a free throw to end the first quarter.

The Purple Tigers cut into the lead in the second quarter and the Lady Bucs led 12-5 at the intermission. Ohnmacht’s free throw was the lone Oswego point in the stanza.

Warner led the charge out of the locker room. She had a rebound and put back layup plus four free throws that ignited the team. Cruz added a basket and Pezzlo a free throw to put the girls up 21-7 after three periods.

Cruz’s layup early in the fourth put the Bucs up sixteen points, their biggest of the game. After a 6-0 Cortland run, Pezzlo added two more layups to cap the scoring.

Deysha Cruz scored 19 points and Giada Pezzlo added 17 and Oswego rallied down the stretch to defeat Fulton 45-32 at the Oswego Middle School gymnasium. Ella Warner tallied six, Abbie Ohnmacht two, and Josephina Scanlon-Howland one for the victors. Defensively Madisyn Mills and Kiyarah Bragg stood out in the win.

The Lady Bucs stormed out of the locker room and led 12-1 after the first quarter. Fulton returned the favor in the second, outscoring Oswego 14-0, and taking a 15-12 lead at the intermission.

The hosts regained the lead after the third, 25-21, but the Lady Red Raiders led 30-28 going into the rare modified “fifth quarter”. Oswego never looked back and outscored Fulton 17-2 over the final seven minutes.

Oswego led 8-3 after one as Pezzlo added a pair of layups, Cruz had a steal and breakaway layup, and Warner netted a bank shot. The Lady Bucs increased their lead to ten in the second after a Lukawski layup and Ohnmacht 3-pointer.

In the second half, Pezzlo added a couple of more layups and Ohnmacht drained another long three. Warner, Cherchio, and Geroux all had layups, Lukawski and Cruz had steals that led to uncontested layups, and Garafolo had a short bank shot.

Giadda Pezzlo had 15 points to lead the OMS Lady Bucs to a 25-21 victory at the Oswego Middle School. Deysha Cruz and Ella Warner each had four points, while Josephina Scanlon-Howland had two.

Oswego jumped out to an 11-6 after the first frame. Pezzlo had six points, Cruz netted three, and Warner two. Scanlon-Howland’s basket was the only points the Lady Bucs scored in the second period and they took a 13-11 lead into halftime.

Pezzlo helped stretch Oswego’s lead in the third period. Her five points, along with Warner’s two, and Cruz’s free throw put the Lady Bucs up 21-15 after three. Pezzlo scored all four Oswego points in the last quarter and the Lady Bucs held on for the victory.