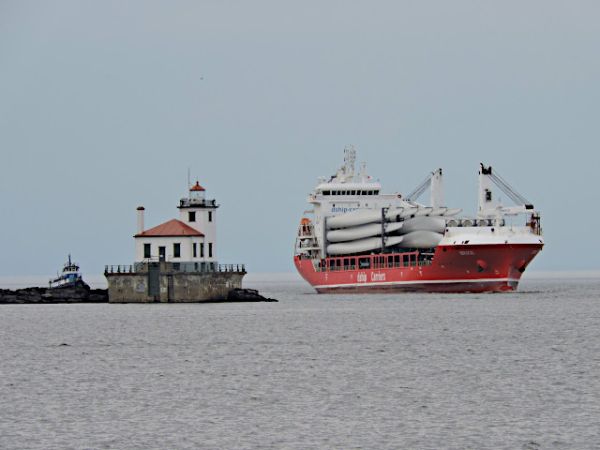 With a record year in 2022, the Port of Oswego Authority ( POA), staked its’ claim as a dominant force in maritime commerce for Central New York, the Great Lakes, and the world.

Shipping alone was up over 300% compared to 2021 , said William, Scriber, POA executive director. And recently, the Port received the U.S. Dept. of Transportation designation as a USDOT Marine Highway, one of only 32 in the United States.

“Our performance in 2022 firmly establishes us as a Great Lakes commerce force and a gateway to the world. We’re also the gateway from Lake Ontario to the NY State Canal system with the first marine entrance on Lock 8 here in Oswego.”

Francis Enwright, chair of the Port of Oswego Authority board said: “Oswego’s history is maritime and boating. A key focus for our board is always bringing commerce and jobs to Oswego. The economic numbers from the past year bear this out and tell a remarkable success story of how we’ve transformed the Port into an international grain export center, a wind turbine component import hub, a vital aluminum receiver for Novelis, and a major innovator in Great Lakes shipping. This positions us a key player in economic development this year with the advent of new potential customers like Micron. ”

Commerce at the port in 2022 generated waves of positive economic impact throughout Oswego, Oswego County, and NY State, Scriber said. Among the highlights were:

In addition, the port received the prestigious Great Lakes/St. Lawrence Seaway Pacesetter Award which recognizes U.S. Great Lakes ports for major increases in cargo shipping. This is the third time the Port of Oswego has won this award in the past four years.

The Port Is Self-Sustaining

Oswego is the last stevedoring port on the Great Lakes, Scriber said. “We receive no state budget and no local tax revenue. We operate as a business and that means we contribute to the local economy. We own all our own equipment, from forklifts to cranes, and we have the added cost of a marketing budget to generate business. We also support our own infrastructure needs, from roofs, to rails, to computer software, and we have specific labor agreements/contracts and hire our own labor.”

According to Scriber, the port invested in both upgrading and expanding its capabilities in 2022, both as part of a strategic plan for growth and as a responsible steward of its assets.

“The Port’s $15 million Regional Agricultural Export Center expansion project—the largest in the Port’s history—provides Central NY access to the world,” Scriber said. “The facility can store up to 22,000 metric tons, and officially opened a USDA, state-of-the-art grain testing lab in May 2022. The only such lab in all of Upstate NY. It’s part of a sustainable revenue model for the Port to spur future additional commercial and job growth.”

In 2022, the Port of Oswego was the first to ship grain out of the St. Lawrence Seaway and is New York’s only grain exporter by water on Lake Ontario. Grain shipments went to the middle east and Europe and helped offset the disruption in the global supply chain by the war in Ukraine, Scriber said. More than 100 local farmers use the port for export at a reduced shipping cost when compared to trucking to ports like Baltimore of Cincinnati.

According to Scriber, the port handled more than 300 wind turbine tower sections, blades, and other components in 2022. “This is a specialized service that we pride ourselves on and have mastered over the years. Handling wind turbine blades that are over 250 feet long and large components showcases the skill of our workers and the efficiency with which we handle them.”

Aluminum is a major import that supplies the Novelis plant in Oswego, Scriber said. “We are the second largest importer of prime aluminum on the Great Lakes. In 2022, we received multiple shipments of aluminum slabs. Each slab weighs more than 26 tons and we handled close to 500 of them.”

In 2022, a historic agreement was signed between the Port and the U.S. Army Corps of Engineers to deepen the Port’s harbor, expand its capabilities to ignite new growth, and be accessible to Seawaymax container ships—the largest traveling the Great Lakes. This may also lead to Oswego being a cruise ship destination in as well.

In addition, the port secured funding for a $754,000 reach stacker that expands the Port’s capability to enter national containerized cargo movement with lower cost, and as a more environmentally sustainable alternative to trucking, Scriber said.

Besides shipping, the Port is an intermodal center, with a tremendous capacity for rail commerce, as well as a bustling site for trucking, Scriber said.

The Port annually supports community events like Oswego’s Harborfest and supports other local organizations. Among the 2022 highlights were:

In 2023, the Port will continue to seek new customers for agriculture and wind turbines, while continually working to secure contracts for additional growth in the year ahead, Scriber said.

The Port of Oswego's strategic location at the crossroads of the Northeastern North American shipping market, puts them less than 350 miles from 60 million people.

Published in On-The-Move Companies
Tagged under

More in this category: « Richard S. Shineman Foundation Bids Fond Farewell to Two Longstanding Board Member More Than A Dozen CNY Organizations Receive Support From NBT Bank »
back to top