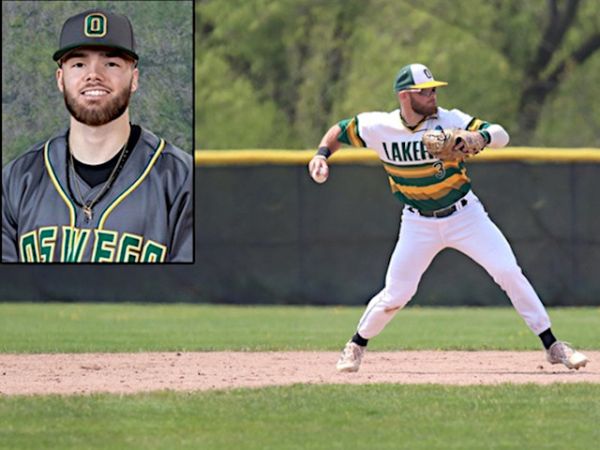 The State University of New York Athletic Conference (SUNYAC) names Oswego's Ryan Enos its 2022 Baseball Scholar Athlete of the Year as nominated and voted on by the conference sports information directors.

Enos was recently named the CoSIDA Academic All-American of the Year for all of NCAA Division III athletics. With a cumulative GPA of a 4.0 in wellness management, he has surpassed his expectations in the classroom, in the community and on the field. This was Enos' fourth first CoSIDA Academic All-America selection. Concluding his final season at Oswego he tied the program's single season doubles record with 21, along with beating the single season RBI's record at Oswego with 60 this season. Enos also finished his season fifth all time in stolen bases (26), seventh all time in walks (29), tied third all time in homruns in a single season (10), second in hits (74), second in runs scored (66), ninth all time in at bats (164) and ninth all time in batting average (.451). Enos posted a conference-leading batting average of .451, third in RBI's with 60, tied for fourth in homeruns with 10, and third overall in stolen bases with 26.

During each season, the conference honors student-athletes for their efforts in their sport, as well as their academics. Out of hundreds of spring athletes, one athlete from each sport was selected for this distinction. In order to be eligible for the SUNYAC Scholar Athlete of the Year award student-athletes must prove both academic and athletic excellence by obtaining a minimum 3.30 overall GPA, be a starter or significant reserve for their team, and be at least a sophomore. The SUNYAC Scholar Athlete Award began in 2016-17.