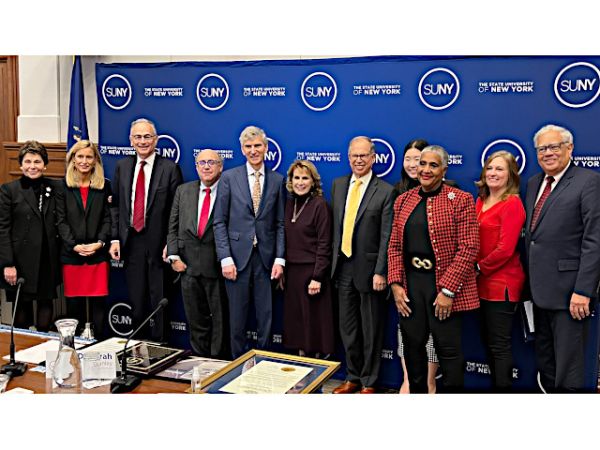 Interim SUNY Chancellor Deborah F. Stanley is surrounded by SUNY Board of Trustees after she was honored and appointed President Emeritus of SUNY Oswego at the Trustees Dec. 13, 2022 meeting in Albany. Submitted photo

The State University of New York (SUNY) Board of Trustees adopted a resolution at their Dec. 13, 2022 meeting, bestowing retired SUNY Oswego President Deborah F. Stanley with the honorary title of President Emeritus.

After serving as interim president from 1995-1997, President Stanley was appointed the tenth president of SUNY Oswego in 1997. She has served as a remarkable leader and transformative president for the past twenty-six years. Prior to becoming president, she taught and earned tenure in the School of Business and served as the Vice President for Academic Affairs and Provost, making her service to the institution span over 44 years. She retired in December 2021, before serving as Interim Chancellor for SUNY over the past year (2022).

SUNY Oswego Officer in Charge Mary C. Toale said, “President Stanley's legacy is ingrained in the tapestry of SUNY Oswego. It is evident on campus, in the region, state, and at the national level. It is also reflected in her strategic and thoughtful leadership as well as in her profound commitment to the power of education to transform lives. She led the university with passion and purpose, and her insight and vision laid a foundation for SUNY Oswego and future generations of Lakers to thrive well into the future. Recognition of President Stanley’s steadfast commitment to higher education as President Emeritus is a befitting honor. We are proud to call President Stanley President Emeritus of SUNY Oswego.”

James McMahon, SUNY Oswego College Council Chair added, “President Stanley has been an extraordinary and truly transformational leader for SUNY Oswego and its extended community. Her leadership has influenced and uplifted many sectors beyond education including economic, political and social.  Receiving the distinction of President Emeritus from the State University of New York Board of Trustees is a deserving capstone to her exceptional career and visionary, dynamic and highly impactful service to public higher education.”

TO: Members of the Board of Trustees

I recommend that the Board of Trustees adopt the following resolution:

Whereas President Stanley served successfully for 23 years in her role as President, 2 years as Interim President, and 1 year as Interim Chancellor of the State University of New York, contributing a total of 25 years of her career to the success and reputation of SUNY Oswego, 26 overall to the SUNY System as a steadfast and transformative leader, and more than 45 years of her career in service to SUNY and higher education in total; and

Whereas Deborah F. Stanley leaves a distinguished legacy of excellence prior to her prestigious appointment as President through her time serving as vice president for Academic Affairs, Provost, faculty member in the School of Business, and executive assistant to former President Stephen L. Weber, who, along with her peers, held her character and voice in the highest regard in service to the overarching wellbeing of the college, its students, faculty, and staff as well as its community; and

Whereas under President Stanley’s leadership, the college’s reputation as a top-tier public institution grew exponentially for the creation of nationally and internationally accredited academic programs, the strategic realization of $100 million through four capital campaigns to support academic excellence and student success, and results of nearly $1 billion invested in campus renewal, all of which invigorated SUNY Oswego’s comprehensive learner-centric ethos; and

Whereas a beacon of progressive leadership to leagues of SUNY students, faculty, and staff with her appointment as Interim President in 1995 and as President in 1997, Deborah F. Stanley has inspired thousands with her steadfast and thorough approach to academic administration and mentorship of the next generation and the generation after throughout her 25 years of service at the State University at Oswego, which stands today as a pillar of excellence among its peers in our cherished public university system; and

Whereas as President of SUNY Oswego, she further transformed the student experience on its campus by establishing the Presidential Scholarship Program for outstanding academic achievers, the Possibility Scholarship Program for disadvantaged students in the sciences, and the pioneering Oswego Guarantee that promises necessary classes will be available for students to complete a degree within four consecutive years, enhanced in 2013 with the Graduation ROI; and

Whereas President Stanley led the creation of the School of Communication, Media, and the Arts and established the college’s original MBA program, alongside the creation of new, innovative, interdisciplinary and multidisciplinary undergraduate and graduate degree and certificate programs instituted across the curriculum, while also launching the SUNY system's first multiple-major co-op program and creating a WACE Merit Co-op Scholarship Program for SUNY Oswego students; and

Whereas President Stanley obtained the largest philanthropic gifts in SUNY Oswego’s history with a $5 million naming gift and a $7.5 million realized bequest, which was used to create the Marano Scholarship, now providing scholarships to 90 first-generation students per year, to further support deserving students’ access to SUNY Oswego, President Stanley launched and achieved SUNY Oswego’s Path Forward campaign from 2019-2020 to double the amount of need-based privately funded scholarships available annually from 220 to 440; and

Whereas President Stanley has been an extraordinary and truly transformational leader for SUNY Oswego and its extended community, which twice earned the college the prestigious Carnegie Foundation's Community Engagement Classification, influencing and uplifting many sectors beyond education as well as appearing as an invited speaker and panelist at regional, national and international venues on topics such as sexual assault on campus, experiential learning practices, and leadership;

Whereas President Stanley earned a Distinguished Alumni Award from Syracuse University, was named a New York State Woman of Distinction in 2006 by the New York State Senate, received the Post-Standard’s Person of Achievement Award in 2010, and was presented in 2022 with the American Council on Education’s (ACE) Donna Shavlik Award, recognized for sustained commitment to advancing women in higher education through leadership and career development, campus climate, and mentoring.;

Whereas President Stanley’s unwavering commitment to the institution did not end at its property lines, as she committed equally to the community beyond it that, with her encouragement, became yet more invested in the success of the only four-year college in its area and in the entirety of the SUNY system as a whole, making the title of President Emeritus a deserved honor and capstone to her outstanding career as a transformative SUNY leader and public servant; now, therefore, be it

Resolved that Interim Chancellor Deborah F. Stanley be designated President Emeritus of the State University of New York at Oswego, in recognition of her past service, effective December 13, 2022.

More in this category: « Mayor Barlow Announces Youth Basketball Night With Oswego State Men’s Basketball Team It's Official: SUNY Oswego is Now Recognized as a University »
back to top