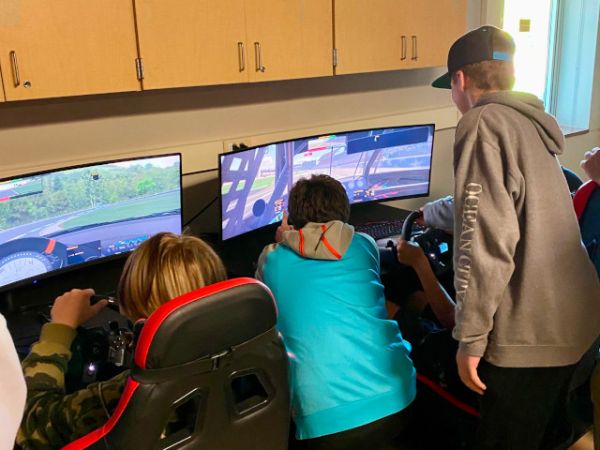 Outside, the snow is piling up and the wind is howling. Inside, iRacers in the City of Fulton’s iRacing League in 36 communities from across NY State, Canada, and 19 states are warm, focused, and strapped into their virtual race cars on a sunny day in ideal racing conditions.

This is much more, however, than just another online game. “It’s serious, realistic racing with large cash prizes, and race participation by both national and regional NASCAR and DIRT drivers,” said James Bakey, Fulton-based iRacing streaming broadcaster and color commentator. “ More real-life drivers are getting involved and that’s validating this as a true sport. NASCAR driver Dale Earnhardt, Jr. is involved, and the racing is so realistic, that some NASCAR drivers are testing their cars iRacing instead of a ‘real’ track. The national eNASCAR Coca-Cola iRacing Series, for example, has offered thousands of dollars in prizes, with some offering $10,000 for first place.”

In Fulton, the league is steadily growing and has been embraced as part of STEM education at the Fulton high school, said Chris Waldron, City of Fulton Parks and Recreation director who started the iRacing league with Bakey and Robby Swan from Oswego in early 2022. “Students there are benefiting from learning everything from engineering preparation to graphic design and video editing.”

“The rapid growth of this program—the first city league in the nation— and the many ways it’s helping educate, entertain, and expand our city’s positive image is tremendously impressive,” said Fulton Mayor Deana Michaels.

Angela Tagariello, iRacing’s manager of sales and marketing, said: "We're thrilled that we can support the Fulton community by providing a platform designed to entertain and challenge all users, and we look forward to seeing how Fulton's participants will use their experience to do great things. Today’s STEM students are tomorrow’s innovators in the world of motorsports, and iRacing is happy to help build a bridge for them to get into real racing by applying the skills they’ve already learned and developing new ones.”

Robby Swan is a member of the iRacing Apex Industries group, and he’s been involved in simulated racing for more than seven years. It’s his job to race for Apex. When he wins, he tells the other racers that the car he drove is from Apex and how they can also acquire one. “I saw that Chris was establishing the league and I offered to help,” Swan said. “I hope that this grows into something where it is in the majority of high schools around the county and the U.S. What the City of Fulton has done is incredible and it’s right in my back yard.”

Kyle Perry, who oversees the iRacing program at Fulton’s G. Ray Bodley High School, agrees with Waldron: “iRacing has been a great tool for us to teach our students real life STEM applications. We use iRacing to teach students the physics of race cars, along with using real life telemetry software to make improvements to the cars setups to increase speeds and lower lap times. Using a realistic simulation such as iRacing to teach STEM was a no-brainer given our department's extensive racing background, along with Central New York being home to multiple dirt and asphalt racetracks. Students have taken a strong interest in not only racing but helping build simulators as well and our numbers have tripled from last school year.”

In addition, Perry emphasized the wide range of skills students are learning through their participation: “Along with learning the engineering concepts about how race cars work, how to make them faster and how to drive them faster, there are many other skills that students can learn, these include Graphic Arts/Digital Media Design, Sports Broadcasting and Business Management. Students are using the Adobe Suite (Illustrator and Photoshop) to paint their own cars that thousands of people around the world they are racing against will see. Many students are interested in broadcasting their races to various streaming platforms including Twitch and YouTube, where they can provide the audience with their analysis on the race, along with interacting with viewers. Lastly, students will be creating sponsorship proposals to local businesses for program funding and learning how to properly allocate funds within the club so there is little to no out of pocket cost for them to participate.”

The high school has four complete racing stations, Perry said, but they have plans for at least seven.

In addition to the Fulton City School District’s involvement, Fulton Speedway has also allied itself with the city’s iRacing league. Cory Reed, who handles marketing for both Fulton and Brewerton Speedways, said iRacing keeps racing fans engaged with his brand during the off-season. “The challenge we have is how to remain relevant all year as a seasonal business. This promotion keeps eyes on our brand in the off-season, helps us develop sponsorship and advertising programs for our regular season, and engages current and future racers,” he said. “What I find great about iRacing is that drivers that never have the chance to compete against each other in real cars due to proximity, can do so online through this league. Also, fans can compete side-by-side with their heroes. As of December 1, there are 91 drivers signed up for the league from 19 different states and multiple Canadian provinces.”

Reed said that Fulton Speedway is pleased to partner with the city. “iRacing has grown exponentially in recent years, and when our NE Modified style of race car became a part of the game, it became a real player in our region. On behalf of track owner John and Laura Wight, I’d like to thank Mayor Deana Michaels, Chris Waldron, and the City of Fulton for their efforts. This is just one of so many valuable community-based initiatives in recent years that they’ve established for the betterment of the city.”

In addition to the wide range and number of participants, viewership of streaming races or posted race videos has grown as well. “I get as many as 400 live viewers during a race livestream,” Bakey said. “And I get tens of thousands of views on video. It’s another way to bring people together and engender pride in Fulton.”

According to Waldron, the City of Fulton is one of the first cities in the country to host its own iRacing League. “Our followers on our Parks and Rec Facebook page have grown from 600 in October 2020 to more than 2,300 today.”

Waldron also announced that the City of Fulton Racing Series is back with the First Municipal iRacing Dirt League in the country. “All racing slots and sponsorships are full,” he said. “The response has been amazing.” Anyone interested in more information can message Waldron through the Fulton Parks and Rec Facebook page.

More in this category: « OMS Lady Bucs Complete Perfect Season
back to top